“A £1000 guitar might as well be a £10 catalogue guitar if it isn’t set up properly.” Let me set it up for you and release its true potential. A guitar should be a dream to play, not something to battle with night after night. Skimming (stoning) frets, fine tuning the action and intonation can transform an instrument from something that seems to have a mind of its own to something you actually look forward to playing and creating some good sounds with. 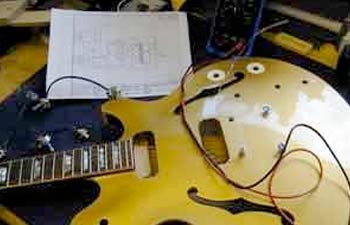 The following photographs are of a completely unplayable 60′’s Gibson 12 string, the bridge had dropped and the action was a mile high. The photograph shows a crack in the top that had previously been repaired and cleated, not a bad job, but only the crack had been fixed – the real problem was that the blow or pressure that had caused the crack had done more damage than just crack the top. After a time under full string pressure the action had changed dramatically, due to the bridge dropping on its front edge. 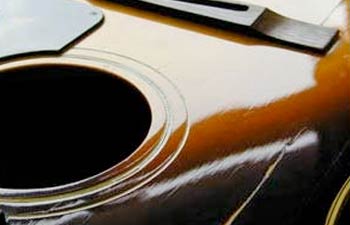 The next photograph from a mirror inside the guitar shows two loose struts where the fibres of the top had come away with the strut when it got the blow. The result of the two loose struts was that the bridge no longer had any support on its front leading edge, the top was sinking into the body and the action was going sky high.

The solution was to clamp the top back into its crowned position and leave it like that for a couple of weeks, really to let the top get used to being back in its original state after many years. After a couple of weeks the struts were glued back in place – this was all done with the top still clamped back into it’’s crowned state. Three days later when all the glue had dried the crown was back in the top – it was restrung, a new bridge saddle made for it, result was it played like a dream. Note: the fabric used by Gibson at this time for reinforcing the bracing – a solution but not the best, that’’s why it’’s not often seen on modern guitars, better glues and assembly methods have improved things. 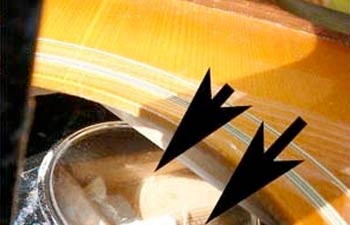 While on the subject of loose struts. Someone decided to sit on the case of this Crafter Acoustic not realising the case would not take their weight. Lots of surface cracks that could be repaired but the customer also complained of some rattling that seemed to come from inside – the strut ends had been loosened and were rattling. A bit of glue and a clamp fixed the problem.

This Gibson Les Paul was apparently a cheap e-bay buy! – it turned out to be an expensive horror, the description said professionally repaired head break! – The head break had been repaired and set with the wrong angle on the headstock, it was almost parrallel to the fingerboard – how they managed that I don”t know! this resulted in no down bearing over the nut, strings rattled in the nut and to cap it all they had managed to remove so much wood around the truss rod cavity that it no longer worked. The job was a new neck, fingerboard and refinish of the neck, all I managed to salvage from the old neck was the headstock veneer containing the pearl logo and transfer – I left what remained of the old headstock in the case to later prove the serial number of the instrument. It was a nasty and expensive job!